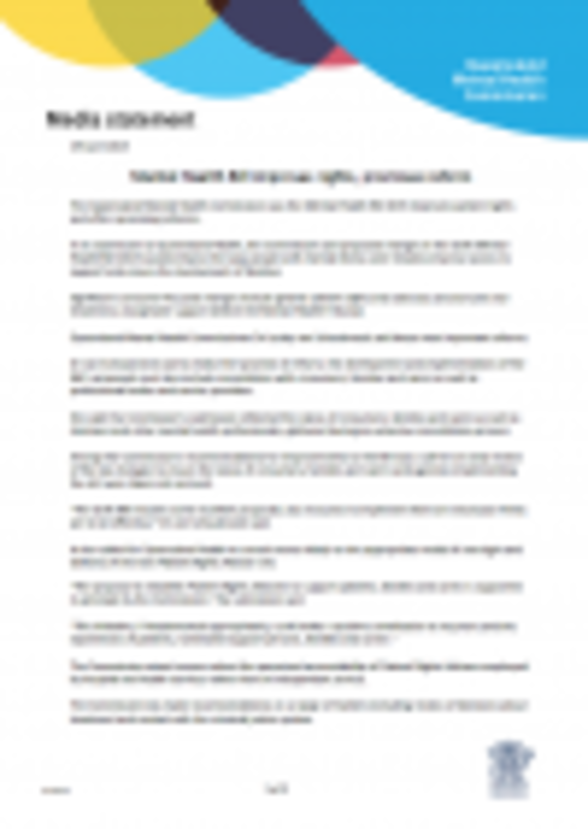 In its submission to Queensland Health, the Commission said proposed changes in the draft Mental Health Bill 2015 would enhance the way people with mental illness were treated, improve access to support and ensure the involvement of families.

Significant consumer-focused changes include greater patient rights and advocacy around care and treatment, and greater support before the Mental Health Tribunal.

Dr van Schoubroeck said to realise the promise of reform, the development and implementation of the Bill’s proposals must also include consultation with consumers, families and carers as well as professional bodies and service providers.

She said the Commission's submission reflected the views of consumers, families and carers as well as clinicians and other mental health professionals, gathered during an extensive consultation process.

Among the Commission's recommendations for improvements to the Bill was a call for an early review of the key changes to ensure the views of consumers, families and carers and agencies implementing the Act were taken into account.

"The draft Bill includes some excellent proposals, but resources to implement them are necessary if they are to be effective,” Dr van Schoubroeck said.

It also called for Queensland Health to consult more widely on the appropriate model of oversight and delivery of the new Patient Rights Adviser role.

"The proposal to establish Patient Rights Advisers to support patients, families and carers is supported in-principle by the Commission," the submission said.

"This initiative, if implemented appropriately, could make a positive contribution to recovery and the experiences of patients, nominated support persons, families and carers."

The Commission raised concern about the perceived accountability of Patient Rights Advisers employed by hospital and health services rather than an independent service.

The Commission has made recommendations on a range of matters including review of decisions about treatment and contact with the criminal justice system.

The Commission also noted that the Bill includes restrictions on patient use of communication devices which could result in blanket bans on use of mobile phones and the use of video communication.

"The Commission accepts that there is a need to protect the privacy and wellbeing of others in mental health wards however these issues can be resolved in a number of ways including providing a private area for use of these devices," the submission said.