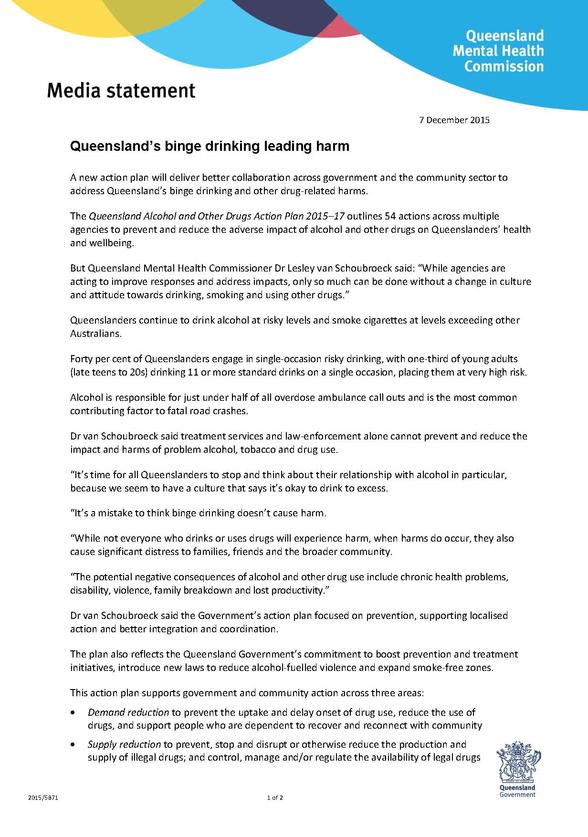 A new action plan will deliver better collaboration across government and the community sector to address Queensland’s binge drinking and other drug-related harms.

The Queensland Alcohol and Other Drugs Action Plan 2015–17 outlines 54 actions across multiple agencies to prevent and reduce the adverse impact of alcohol and other drugs on Queenslanders’ health and wellbeing.

But Queensland Mental Health Commissioner Dr Lesley van Schoubroeck said: “While agencies are acting to improve responses and address impacts, only so much can be done without a change in culture and attitude towards drinking, smoking and using other drugs.”

Queenslanders continue to drink alcohol at risky levels and smoke cigarettes at levels exceeding other Australians.

Forty per cent of Queenslanders engage in single-occasion risky drinking, with one-third of young adults (late teens to 20s) drinking 11 or more standard drinks on a single occasion, placing them at very high risk.

Alcohol is responsible for just under half of all overdose ambulance call outs and is the most common contributing factor to fatal road crashes.

“It’s time for all Queenslanders to stop and think about their relationship with alcohol in particular, because we seem to have a culture that says it’s okay to drink to excess.

“It’s a mistake to think binge drinking doesn’t cause harm.

“While not everyone who drinks or uses drugs will experience harm, when harms do occur, they also cause significant distress to families, friends and the broader community.

“The potential negative consequences of alcohol and other drug use include chronic health problems, disability, violence, family breakdown and lost productivity.”

Queensland Network of Alcohol and Other Drug Agencies (QNADA) Chief Executive Officer Rebecca MacBean said the development of a new plan has strengthened the partnership between the Commission, Government and non-government agencies to minimise the harms associated with alcohol and drug use.

“As part of the process, we were able to engage with frontline workers, clients of treatment services, their families and friends, who made a significant and valuable contribution to developing this plan,” Ms MacBean said.

“I feel confident that Queenslanders who experience problems related to their substance use, or the substance use of a loved one will have access to better supports once this plan has been implemented.”

Dr van Schoubroeck said reform would be ongoing as a new National Drug Strategy, the National Ice Strategy and the Queensland Mental Health, Alcohol and other Drug Services Plan will be delivered over the next 12 months.