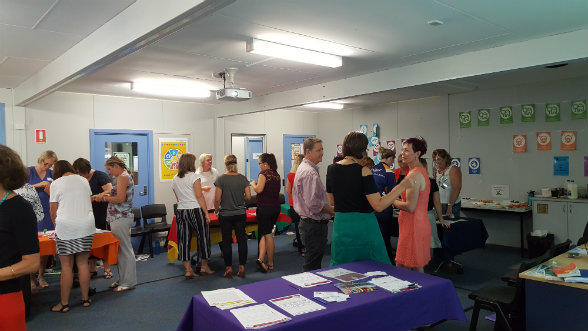 Participants at one of the Wheel of Wellbeing facilator training days

In early 2017, we partnered with Education Queensland to deliver the Wheel of Wellbeing (WoW) to regional school mental health coaches, who through a train-the-trainer model could optimise its use within school communities.

With the number of WoW Advanced Practitioners now steadily rising throughout schools, momentum is gathering around it as a tool of positive change.

Lydia Najlepszy, school mental health coach in the North Coast Region, was trained among the first wave of WoW Advanced Practitioners, and with remit across 223 schools (and many workshops down), she’s starting to see its influence within those communities, as she encourages participants to implement the learnings both personally and professionally.

As a mental health coach Lydia’s role is to support schools to manage the wellbeing of their communities. Increasingly people are asking her about WoW, and she is hearing of schools using it in new and innovative ways.

“Less a framework and more a toolbox, at first glance WoW can seem deceptively simple, yet we’re hardwired for this stuff,” she said.

“The combination of positive psychology and neuroscience, means that the science behind WoW gives it weight.

“On the one hand it can be used as a personal tool of transformation, but it can also be used systemically to build capacity among school staff for both personal and professional benefit.”

Lydia, an experienced prevention and wellbeing practitioner and educator, said WoW is being used in ways that weren’t expected—it’s adaptable to the setting.

“Kids are using the techniques to counter the impacts of the spectrum that ranges between bullying and friendship tussles.

“We heard of schools using mindfulness techniques to start off staff meetings to help ‘shift gears’ between classroom and corporate mindsets.”

An Agnes Water community member was so struck with it, she took WoW back to her local church to bring mindfulness practices into the congregation.

Given the take up rate of WoW at recent workshops and the ‘grapevine effect’ of Trevor Buchanan, Principal Agnes Water State School who recently presented on the positive impacts of WoW to 100 school principals, we expect schools and their communities to be hearing more about WoW, if they’ve not heard about it yet.

“People are starting to ask me about WoW, which is a real shift,” Lydia said.

Learm more about our work around capacity building.