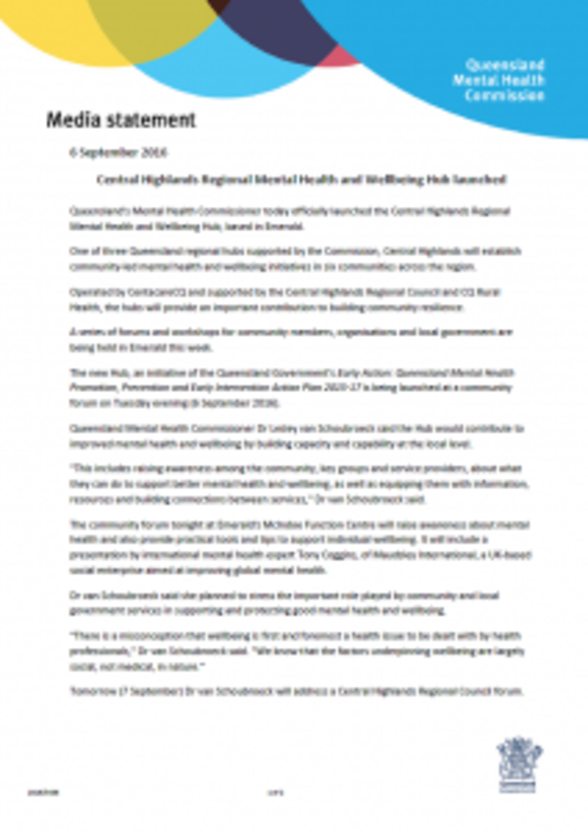 One of three Queensland regional hubs supported by the Commission, Central Highlands will establish community-led mental health and wellbeing initiatives in six communities across the region.

Operated by CentacareCQ and supported by the Central Highlands Regional Council and CQ Rural Health, the hubs will provide an important contribution to building community resilience.
A series of forums and workshops for community members, organisations and local government are being held in Emerald this week.

The new Hub, an initiative of the Queensland Government's Early Action: Queensland Mental Health Promotion, Prevention and Early Intervention Action Plan 2015-17 is being launched at a community forum on Tuesday evening (6 September 2016).

Queensland Mental Health Commissioner Dr Lesley van Schoubroeck said the Hub would contribute to improved mental health and wellbeing by building capacity and capability at the local level.
"This includes raising awareness among the community, key groups and service providers, about what they can do to support better mental health and wellbeing, as well as equipping them with information, resources and building connections between services," Dr van Schoubroeck said.

"There is a misconception that wellbeing is first and foremost a health issue to be dealt with by health professionals," Dr van Schoubroeck said. "We know that the factors underpinning wellbeing are largely social, not medical, in nature."

"Central Highlands Regional Council has a proud and demonstrated record of supporting a better life for its citizens and building strong and resilient communities," she said. "This foundation is important as the region adapts to the impacts of drought and the downturn in the resources sector.

"The opportunity to have a conversation with local government representatives about our shared interest in wellbeing is greatly valued."