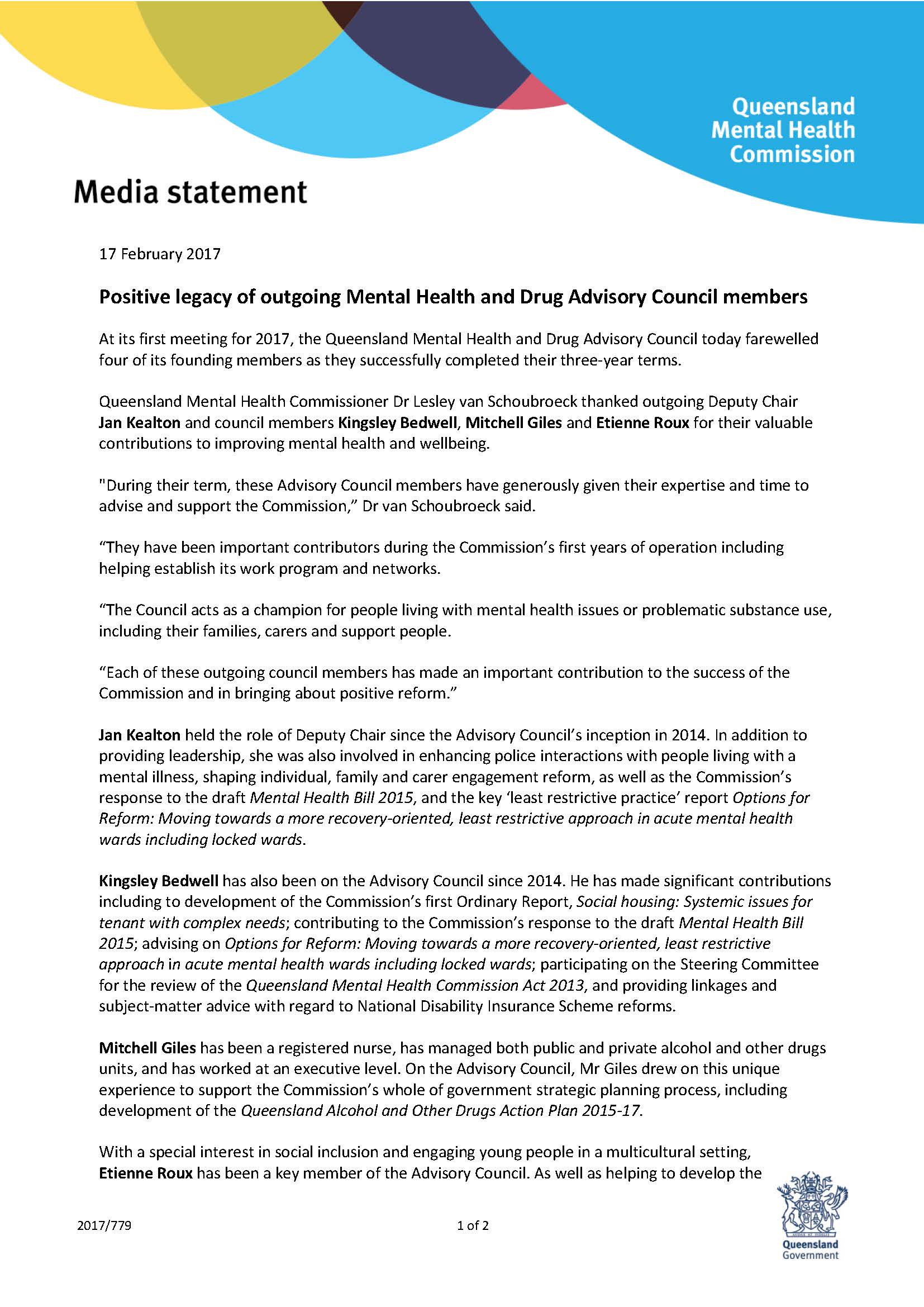 At its first meeting for 2017, the Queensland Mental Health and Drug Advisory Council today farewelled four of its founding members as they successfully completed their three-year terms.

"During their term, these Advisory Council members have generously given their expertise and time to advise and support the Commission,” Dr van Schoubroeck said.

“They have been important contributors during the Commission’s first years of operation including helping establish its work program and networks.

“The Council acts as a champion for people living with mental health issues or problematic substance use, including their families, carers and support people.

“Each of these outgoing council members has made an important contribution to the success of the Commission and in bringing about positive reform.”

Jan Kealton held the role of Deputy Chair since the Advisory Council’s inception in 2014. In addition to providing leadership, she was also involved in enhancing police interactions with people living with a mental illness, shaping individual, family and carer engagement reform, as well as the Commission’s response to the draft Mental Health Bill 2015, and the key ‘least restrictive practice’ report Options for Reform: Moving towards a more recovery-oriented, least restrictive approach in acute mental health wards including locked wards.

Kingsley Bedwell has also been on the Advisory Council since 2014. He has made significant contributions including to development of the Commission’s first Ordinary Report, Social housing: Systemic issues for tenant with complex needs; contributing to the Commission’s response to the draft Mental Health Bill 2015; advising on Options for Reform: Moving towards a more recovery-oriented, least restrictive approach in acute mental health wards including locked wards; participating on the Steering Committee for the review of the Queensland Mental Health Commission Act 2013, and providing linkages and subject-matter advice with regard to National Disability Insurance Scheme reforms.

Mitchell Giles has been a registered nurse, has managed both public and private alcohol and other drugs units, and has worked at an executive level. On the Advisory Council, Mr Giles drew on this unique experience to support the Commission’s whole of government strategic planning process, including development of the Queensland Alcohol and Other Drugs Action Plan 2015-17.

With a special interest in social inclusion and engaging young people in a multicultural setting, Etienne Roux has been a key member of the Advisory Council. As well as helping to develop the Queensland Mental Health, Drug and Alcohol Strategic Plan 2014–2019, he supported and advised on the review of suicide prevention resources for culturally and linguistically diverse communities, and promoted contemporary engagement methods. He also contributed to the growth and development of Queensland Mental Health Week.

Appointments of new advisory council members will be announced by the Minister for Health, Cameron Dick MP in due course.

View other news related to these topics:
Corporate information