On 14 April I hosted the much anticipated inaugural meeting of the Queensland Mental Health and Drug Advisory Council in Brisbane.

Our first meeting was a great success and a fantastic beginning for the Council, who were very enthusiastic about meeting and shaping the program of work ahead.

We discussed and agreed a shared vision and talked about practical solutions that will make a positive impact to people living with and recovering from mental health and substance use difficulties, their families and carers.

We also talked about the work of the Commission to date, the role of the Council going forward and had initial discussions around the direction of the whole-of-government strategic plan.

We are meeting again on 12 May, where we’ll be focusing on the elements of the strategic plan.

In the month ahead, I will continue meeting with agency heads and other key stakeholders as we finalise the strategic plan.  The proposed elements of the plan are included in my presentation to senior mental health leaders on 29 April.

This month I also visited Emerald to continue discussions around how to improve access to mental health services in rural Queensland.

I met with people working in all areas of the sector including public, private and non-government.

It was a good opportunity for local people to get together and discuss how, as a community, they could work together and make the best use of their combined skills and resources.

My visit to Emerald has also contributed to the ongoing work program that began with the Ministerial Roundtable held in Charleville in March to discuss the impact of the drought.

Work on this rural and remote mental health agenda continues to progress, with the Commission taking the lead on co-ordinating the work being undertaken in this area. 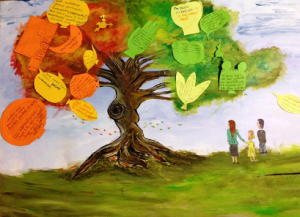 The theme of National Youth Week this year was ‘our voice, our impact’.

Commissioner Dr Lesley van Schoubroeck visited headspace Inala where she was presented with a piece of artwork which was developed during a consultation with young people in December 2013. 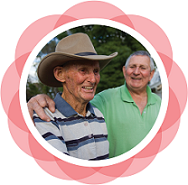 Read more about the review of social housing

Read more about the review of locked wards

Join the discussion in 2014 at one of Australasia’s longest running and premier mental health conferences from 26-29 August in Perth.

The Queensland Mental Health Commission has recently appointed Carmel Ybarlucea in the role of Executive Director.

In her role as Executive Director, Carmel will be responsible for strategy, policy and research.

Carmel has worked in the community legal sector, Legal Aid Queensland and more recently in the Department of Aboriginal and Torres Strait Islander and Multicultural Affairs.