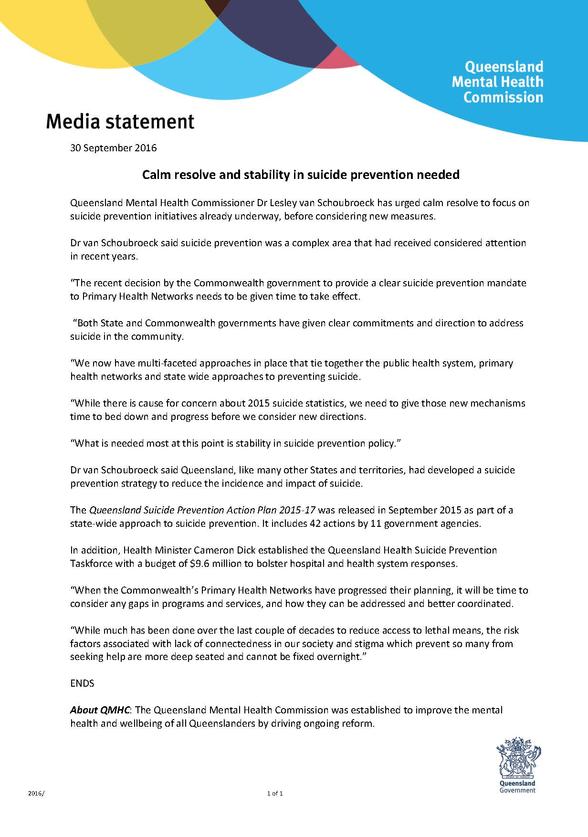 “The recent decision by the Commonwealth government to provide a clear suicide prevention mandate to Primary Health Networks needs to be given time to take effect.

“Both State and Commonwealth governments have given clear commitments and direction to address suicide in the community.

“We now have multi-faceted approaches in place that tie together the public health system, primary health networks and state wide approaches to preventing suicide.

“While there is cause for concern about 2015 suicide statistics, we need to give those new mechanisms time to bed down and progress before we consider new directions.

“What is needed most at this point is stability in suicide prevention policy.”

Dr van Schoubroeck said Queensland, like many other States and territories, had developed a suicide prevention strategy to reduce the incidence and impact of suicide.

The Queensland Suicide Prevention Action Plan 2015-17 was released in September 2015 as part of a state-wide approach to suicide prevention. It includes 42 actions by 11 government agencies.

“When the Commonwealth’s Primary Health Networks have progressed their planning, it will be time to consider any gaps in programs and services, and how they can be addressed and better coordinated.

“While much has been done over the last couple of decades to reduce access to lethal means, the risk factors associated with lack of connectedness in our society and stigma which prevent so many from seeking help are more deep seated and cannot be fixed overnight.”